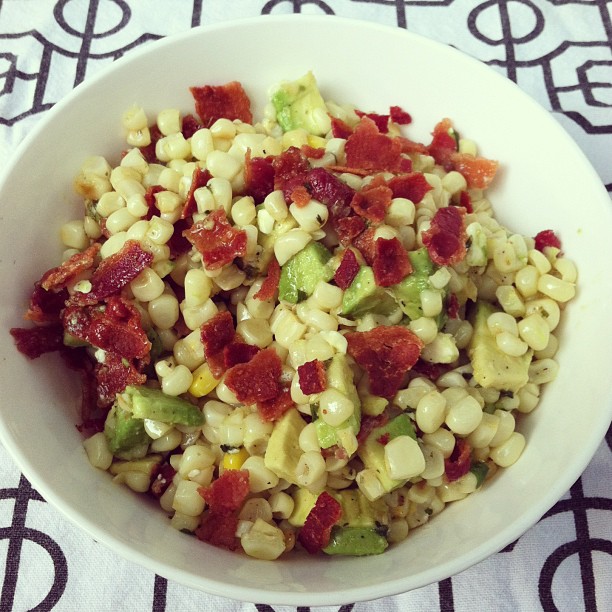 I have been meaning to share this recipe for awhile now.   I made it weeks ago- I blame pregnancy brain for forgetting til now to share. This salad was ridiculously good, but how could it not be with all my favorite ingredients.   Corn and bacon should always be paired together and the creamy feta just ties everything together perfectly.  We used this as a side with grilled fish and it was such a tasty summer meal!

A few things I did differently was I used microwave bacon instead of cooking mine in a skillet- I was feeling supper lazy and it is so easy just to microwave and crumble it up.  It saves time and cuts out some of the grease but I am sure the recipe way is better.  Cooking in grease always tastes better.   Since I had no bacon grease I sauteed the corn in olive oil.  I thought it was delish and would totally make this again, plus it looks beautiful if you want to impress guests!
Enjoy!

1. Place a heavy skillet over medium heat.
Arrange the bacon strips in the skillet and cook on both sides until
the bacon is crisp, 5 to 6 minutes. Transfer to a paper towel-lined
plate to dry. Remove all but 1 tablespoon of the bacon fat from the
skillet.

2. Cut the kernels off each cob by laying the cob flat on a cutting
board and using a sharp knife to remove the kernels. Discard the cobs
and transfer the kernels to the skillet with the bacon fat. Cook the
corn over medium-high heat until it is just slightly golden brown, about
5 minutes. Turn off the heat, crumble in the cheese, and add the
cilantro and lime juice. Let the mixture cool to room temperature.
Roughly crumble the bacon into the corn mixture and toss to combine.