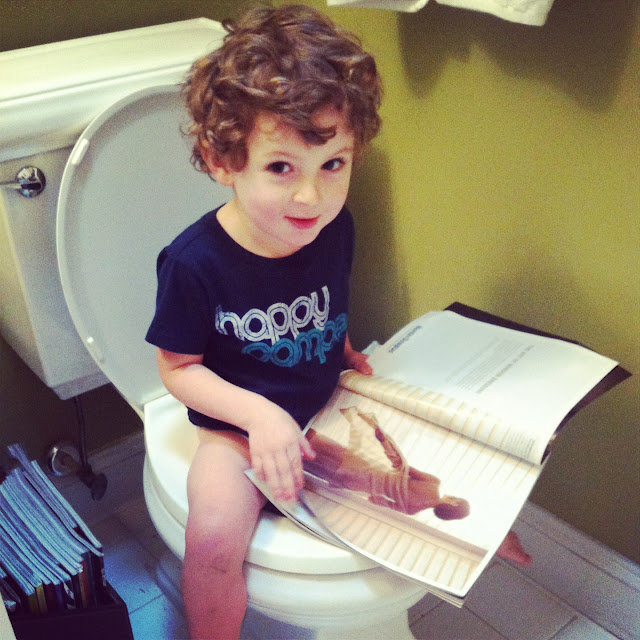 Let me start by saying I am no expert on potty training- at all.  I can promise you I am no expert on anything parenting related either.  I am learning as I go and screwing up alot along the way.  But I have gotten several emails from readers wanting to know what worked for Sterling and how we managed the change from diapers to big boy underwear.  This is what worked for us and I know all kids are different.

Here’s the deal, on Saturday Sterling told me he wanted to poop in the potty.  I obliged laughing thinking he’s just gonna sit there.  Well low and behold he pooped and ever since then he has gone in the potty (pee and poop).  Not one accident.  We do use pull-ups at night- that is unpredictable and Mama doesn’t want to be getting up all night helping him pee.  Otherwise he has seemingly mastered the art of using the potty.

Here is what I know.

1) The most important thing is making sure your child is ready.  I see way too many people try to start training their kids at age 2 and earlier and in my opinion that is way too early.  You are setting your self up for accidents because at 2 it is hard for them to understand and grasp the whole concept.  And why rush things?  It will just take longer to get the end result when you kid isn’t ready.    I have heard from numerous people to wait til your child is three or after.  I know it differs for each kid but that is a constant that I heard from other parents.  Sterling turns three next month and in all honesty I was going to wait til this summer to start potty training but he apparently had other plans, he was ready.

2) Use a regular potty.  I know the small portable potties work for some kids but we never used one.  I feel like when you are out in public or somewhere where there is not a small potty then issues arise because they are so used to using that small one and they don’t know how or want to use a real one.  We don’t even use a training seat. Another bonus of the child being a little older it is easier for them to sit on the potty.  Sterling knows how to straddle it to sit.  This makes it easy to use the bathroom anywhere we are.

3) Slowly introduce them to the potty.  For months now we have taught Sterling how Mommy and Daddy pee pee.  We have let him flush the toilet and see how it all works.  I have never pressured him to use it, I just would occasionally ask “you want to tee-tee on the big potty?” and his response was always “no” til last weekend.   I never pressed the issue when he said no.  We also bought him some cool big boy underwear but told him he could not wear them until he used the big potty.  The underwear has been sitting in his room for like 4 months now and he always asks to wear it but the deal is no unless you actually go in the big potty.  Do not let your kids wear the underwear over their diapers, that is a bad idea.  Since they pee in their diaper while the underwear is on then when they just wear the underwear they will think it is ok to pee in it.  We never bought or used any potty books.  I do think if they see their friends doing it this helps too because they don’t want to be the only kid in diapers.

4) Make a BIG deal about it when they pee/poop in the potty.  We have been praising Sterling non-stop since he went in the potty and this makes him so proud of himself.  Encourage them.  We bought him a few treats the first few times he went like ice cream, new underwear, coloring book etc.  This got him excited. We called all the grandparents and let him brag on himself.  We constantly tell him what a big boy he is and how awesome it is that he uses the big potty.  He loves all the attention and I think this makes him want to keep peeing/pooping in the potty.

5) Don’t stress- how many kids do you know that go to kindergarten still diapers?  Eventually they will catch on.

My proud little man and I am one proud Mama.  Over all this transition was way easier than I imagined it would be, mainly because I feel like we waited long enough for Sterling grasp the idea and be ready.  The super hero underwear helped too:) 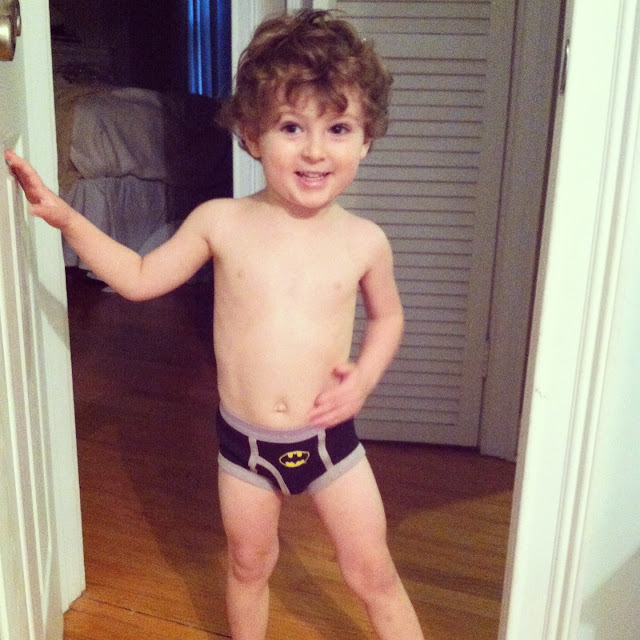