I confess I have never made twice baked potatoes before. This was my first attempt and I must say they turned out quite scrumptious. This was my sneaky way of getting the men in my life to eat more veggies. I thought if I mixed the veggies in with potatoes and cheese they would eat them- and I was right, my disguise worked. They both scarfed down spinach, mushrooms and potatoes- score! In order to get Matt to consider this a real meal, I added a few slices of bacon to the top. He doesn’t consider things a meal unless meat is involved. The bacon is totally optional but it does add a nice salty flavor to the potatoes. These potatoes were so decadent and tasty! The veggies meshed perfectly with the creamy potatoes. I totally just made this recipe up with things I had on hand so feel free to adjust to your liking. You can add more or less of anything. 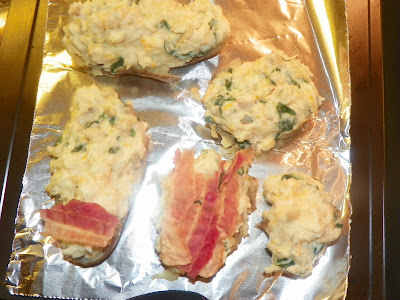 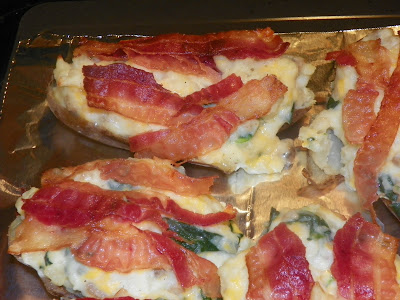 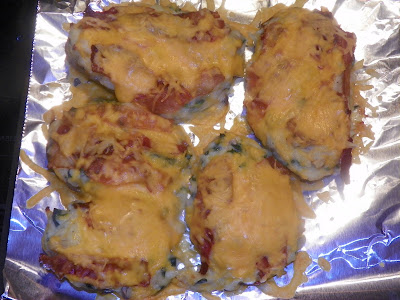 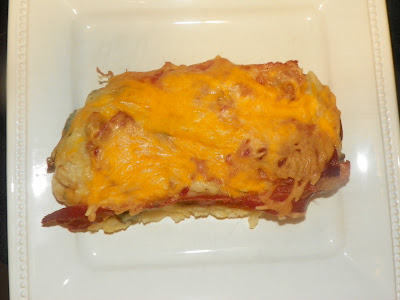 WRAP THE POTATOES IN FOIL AND POKE HOLES THRU WITH A FORK TO HELP VENTILATE. BAKE AT 350 DEGREES FOR ABOUT AN HOUR. LET POTATOES COOL. CUT IN HALF AND SCOOP OUT THE MIDDLE.

MEANWHILE ADD A SMALL AMOUNT OF OLIVE OIL TO PAN AND SAUTE ONION AND MUSHROOMS. ONCE THE ONION HAS BROWNED SLIGHTLY ADD IN THE SPINACH. COOK UNTIL JUST WILTED.

MIX THE INSIDES OF THE POTATOES WITH A FEW SPOONFULS OF SOUR CREAM, A FEW SPLASHES OF MILK AND CHEESE. BLEND UNTIL CREAMY LIKE MASHED POTATOES. ADD SALT AND PEPPER TO TASTE. LASTLY MIX IN THE SAUTEED VEGGIES.

SCOOP THIS MIXTURE INTO THE HOLLOWED SHELLS. PLACE TWO SLICES OF BACON OVER EACH POTATO HALF. BAKE ABOUT 20 MINUTES. PULL OUT AND SPRINKLE TOPS WITH CHEESE AND BAKE ANOTHER 5 MINUTES UNTIL CHEESE MELTS.
BON APPETIT!